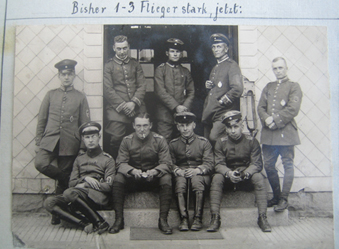 AN EXCEPTIONAL GROUP OF FIVE PHOTO ALBUMS MADE UP BY JEWISH FIGHTER PILOT JACOB WOLFF, ONE OF THE MOST REMARKABLE PILOTS OF WW1 WHO FLEW WITH KEK METZ AND JASTA 17. WITH OUT DOUBT ONE OF THE FINEST AND MOST COMPLETE GERMAN WW1 FIGHTER PILOTS ALBUM GROUPS TO COME ON THE MARKET IN RECENT YEARS

Not only is the group amazing, the pilot himself was quite remarkable. A rich Jewish business man (Cigar manufacturer) who at 46 in 1914 was exempt from the Army, yet fought prejudice and his age to become the oldest German fighter pilot off WW1 and possibly of all nations. Originally flying 2 seaters, he few Fokker EIII’s in Kek Metz with the likes of Hermann Goering and other later Aces. As an original member of Jasta 17 when it was formed, he was promoted Leutenant from reserve NCO rank, it was something almost unheard of in the German Army. He was severely wounded in a dog fight in mid 1917 and did not return to active service due to wounds. At this point he had 4 confirmed victories and 4 unconfirmed, though at least 2 of the latter were so clear cut, he was most unfortunate not to have them confirmed.

CONTENT OF THE SET OF FOUR BOUND PHOTO ALBUMS

The first 4 outstanding photo albums with 315 photos, all of which are aviation related, are professionally put together and leather bound/embossed like books, indeed, they are pretty much books ready to print as they are – Wolff was very, very rich so could afford the best and of the many 100 albums I’ve had through my hands, including some really stand out ones, these are certainly the best as far as the whole lot is concerned, from subject matter, content and a design point of view. Albums are 24 x 18 cm, so pretty much the size of hard backed books, which I guess was the intention.

The albums have been put together in order giving Wolff’s entire WW1 service from 2 seater pilot to fighter pilot, to forming of the ‘Iron Pilots’ in the early 1920’s. Wolff tells at the beginning that he is writing his war experience for his family.

The photo content, especially Kek Metz and Jasta 17 is amazing but what adds so much is Wolff has used his logbook, unit war diaries etc to tell of his and his units story. Everything has been professionally typed up with room for photos and documents (all original), which have then been added. Of the paperwork added to tell his story, there are things like the original front page from his Soldbuch, flight barographs, copies of award documents, photographs of his awards, combat reports, newspaper clippings, obituaries of squadron members. There is also a page of cuttings of Wolff’s original Postal marks from all his WW1 units; FA 34, KEK Manheim, KEK Metz and Jasta 17. Other non photographs include a postcard from Hoppener and another of with signatures of many pilots from Geschwader Loerzer in 1918.

What is really nice about the group is the last album details meetings with famous German Aces in the early 20's, when they formed a intimate club of around 15 wartime friends called the 'Iron Pilots'; these were some of the greatest living Aces with lots of candid shot of the likes of Baumer, Jacobs, Lothar and Bolko Von Richthofen, Lorezer, Bulow-Bothkamp, Bongartz, Muller, Bolle, Von Boeningk, Schlottmann, Von Haeseler, Schlz-Dornburg etc. Meetings seem to have been held in Wolff’s and Bulow-Bothkamp’s extensive properties in the early 20’s. A signed postcard by most of these pilots is also in the last album.

The fifth and final album is of a totally different format to the others and looks to be a memorial album made up for each of the above during a weekend at Bulow-Bothkamp's. The content seems to revolve around various hijinks. Champagne and caviar! There are photographs of Josef Jacobs diving in full divers gear, swimming, messing around a makeshift tank! Also shots of one of Paul Baumer’s aircraft; he had post war started a commercial aircraft company. It looks like he arrived at the meeting/weekend in his aircraft, so there are various shot of him and others in and around it, including Bulow-Bothkamp's wife ain the cockpit. Like the other albums, there is a commentary of the events, interspersed with comical drawings. From this album and the previous set of 4, Bulow-Bothkamp and Baumer seem to have been particular friends of Wolff’s.

A large portrait photo of Wolff, size 22.5 x 16 cm, as a lieutenant pilot wearing the house order, is also included with the albums, as is large file of research and articles on Wolff.

Wolff’s Uniform and awards were donated to the German Air Force museum in Berlin by the family some years ago. Photographs of the museums display to Wolf are included with a file of research that come with the albums.

On another note, there are surprising similarities between Wolff and the group I also have to American Ace Jacques Swaab; both of course Jewish, both very rich and neither ‘needed’ to serve and both were in the cigarette/cigar industry!