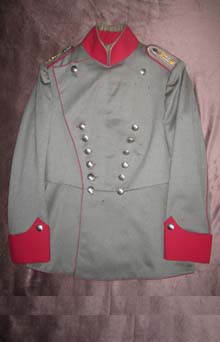 A SUPERB TUNIC BELONGING TO FAMOUS WW1 GERMAN 11 VICTORY ACE RUDOLF STARK, AUTHOR OF ‘WINGS OF WAR’, ARTIST, WHO WAS ONE OF THE EARLY MEMBERS OF THE FLEDGLING SECRET GERMAN AIRFORCE HAVING JOINED IN 1933. A FOKKER DVII IN HIS MARKINGS GRACES THE COLLECTION OF THE NATIONAL MUSEUM OF THE UNITED STATES AIR FORCE

Born on 11th February 1897 to a military family, his father a Lieutenant Colonel in the Bavarian army, Rudolf joined the Army as a Cadet in 1910. By the start of WW1, he had joined the elite 2nd Bavarian Uhlan Regiment, serving as Junior Officer with this regiment in lothringen, Northern France and Flanders, Verdun, Kurland and Poland. During his service with the 2nd Uhlans, he was promoted Lieutenant in October 1915 and for gallantry, he was Awarded the Bavarian Military Merit Cross 2nd Class, Iron Cross 2nd Class and Bavarian Military Merit Order 4th Class. From May 1916, he Commanded the Regiments machine gun squadron.

In March 1917, Stark joined the German air service and after training, he was posted to FA(A) 296 on 18th September 1917. Clearly a good pilot, on 31st December 1817, he was sent for training as a fighter pilot and was posted to Jasta 34b on 18th January 1918. Stark scored five confirmed victories in the spring of 1918 and was Awarded the Iron Cross 1st Class in April. On 24th May, he joined Jasta 77b as Commander, scoring his sixth confirmed victory the day after he arrived. On 7 June, he was reassigned to Command of Jasta 35b where he remained until the end of the war. Stark scored a further five more confirmed victories. On 29th October 1918, Stark was honoured with the Award the Hohezollern House Order Knights Cross with Swords and ended the War being credited with 11 Confirmed and 5 unconfirmed aerial victories.

During his service as a fighter pilot, Stark flew Pfalz DIII’s and a Fokker Dr1 marked with a lilac coloured engine cowling and a lilac band on the fuselage. In August 1918 Jasta 35b were supplied with the new Fokker DVII fighter. Stark applied the same markings to his DVII.

Post WW1, Stark flew for a while with Polizei-Fliegerstaffel 1 at Schleisshei and as a test-pilot for Dornier. After that he went to South Africa but returned to his Germany in 1926. Stark was a very talented artist and for the next few years he worked in the advertising industry producing advertisements, many of a comical nature. In 1933, Stark joined the secret German airforce with the rank of Oberleutnant; a very early member. His duties however were not as a pilot but in administration/command. By 1938 he was a Major in the Luftwaffe. During WW2, Stark commanded various airfields, in Germany, Athens and Italy. He was promoted lieutenant colonel on 1st August 1941 and was Awarded The Italian Commendatore dell'Ordine della Corona d'Italia. Stark was discharged from the service on 31st August 1944. It is unknown what Stark did post War, he did stay in Munich, perhaps went back to working as an artist but he did keep a keen interest in WW1 aviation. Rudolf Stark died in 1982.

In 1933 Stark wrote ‘Wings of War: an Airman's Diary of the Last Year of World War One’, among of the best accounts by a WW1 fighter pilot. He also produced a number of paintings relating to War service and in particular his paintings of aerial combat are some of the most realistic of the time and have been reproduced in many publications.

The above and the markings Stark’s Fokker DVII, make him one of the better known German Aces of WW1, indeed he is better known that some of the Pour Le Merite winners. Indeed the Fokker DVII in The National Museum of the United States Air Force, is painted in Stark’s colours.

A rare opportunity to own a tunic work by one of the best known German Aces of WW1.