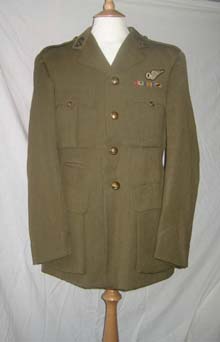 A good quality Officers Khaki Service Dress Tunic by Collett & Seymour of Truro that’s dates inter war or into WW2. The tunic sports an attractive WW1 RFC/RAF Observers wing, which is of the type with brown outline stitching often associated with Canadian or Australian manufacture. A near identical example will be found on page 100 of ‘Flight Badges of the Allied Nations 1914 -18, Vol II’ by Padis. Under the wings are medal ribbons for the 1914 Star and Bar trio, also with an Mentioned in Despatches emblem. The rest of the insignia consists of; Royal Artillery buttons, collar badges and major's crown rank badges to shoulder straps. Straps show evidence that the Officer was originally a Captain.

Note; Most of the photographs are taken with the flash on as it gives better images, however a couple have been taken without the flash to show the true khaki colour.

Tunic is in very good condition, a little wear at arm pits and to right rear of collar, otherwise excellent.