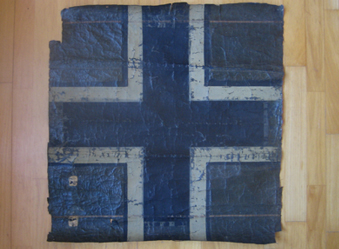 AN INCREDIBLY RARE SECTION OF GERMAN WW1 NIGHT LOZENGE FABRIC DISPLAYING TWO TYPES OF 1918 BALKENKREUZ WHICH WAS REMOVED FROM THE PORT SIDE OF THE RUDDER OF AN AEG GIV BOMBER. SOLD WITH THE NAMEPLATE OF A FRIEDRICHSHAFEN GIIIa WHICH WAS BROUGHT BACK FROM THE WAR BY THE SAME SOLDIER

The fabric and cross itself measures 79cm height and 75cm width at its widest part. The width cross is slightly shorter at each end, the missing 2cm (approximately) at each side being where the fabric was attached to the rudder frame itself. It is very unlikely the height of the cross, bar a matter of mm, was any bigger; the dimensions of the rudder frame dictating the maximum width and this in turn dictating the maximum height for the cross to look as even as possible.

There is a slight slope between the top right and bottom right of the fabric which would roughly follow the gradient on the AEG rudder frame. To the very top left of the fabric is a rectangular section missing which is exactly the area where the rudder hinge would have been.(see pics of rudder frame)

The original cross painted onto the fabric was 65 x 65cm, including a 1.5cm white border around the entire cross. The cross has then been repainted and enlarged to conform to the later specifications, increasing the height and width of the cross. The white border has increased from 1.5cm to 5.5cm, this with a 1cm black border……………

……There were approximately 320 AEG GIV bombers produced between 1916 and the end of the War, only one of which survives. Whether any other AEG GIV rudder crosses exist is unknown but none could be located when researching this piece of fabric. Condition of the fabric is surprisingly good. The fabric is still pretty supple and the paint that remains is stable, with little no flaking when carefully rolled.

The vast majority of fabric crosses that come on the market are from fighters such as the Fokker DVII but even pieces of lozenge fabric without insignia painted onto them are usually the upper four or five colour day type. Examples of night lozenge fabric are rare but examples with a fuselage or rudder cross are incredibly rare. Here you have not only the rare night lozenge fabric but a full rudder cross, which shows the use of two types of cross. All in all this is an outstanding and very rare piece.